Skip to content
View cart “Sponsor – Apollo” has been added to your cart. 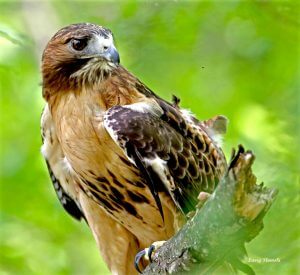 Lady Hawk was admitted to the original rehab center back in 1992 when she was less than a year old.  She had been found along the side of the road, suffering from a wing injury.  Although no one knows exactly how Lady Hawk was injured, she was most likely hit by a car, damaging the tendons and ligaments in her wing. Lady Hawk is unable to be released because she cannot extend her wing fully which is needed to soar and fly adeptly.  However, since 1996 she has been helping Tamarack volunteers with education presentations throughout northwestern Pennsylvania.

Lady Hawk is the matriarch of our ambassador program. She hops onto an offered glove to go on programs and has reached tens of thousands of people over her career as an ambassador. She loves to take baths and vocalizes when eating a favorite meal.