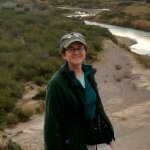 As a professional avian biologist and lover of the outdoors, Sarah Sargent has devoted her life to the science and conservation of birds. The longtime President of Tamarack’s Board, she has great appreciation for the ways that Tamarack is small but mighty, helping birds and mammals with efficiency. She especially remembers one of the first bald eagles she worked with at Tamarack, Freedom’s Spirit, a large female who required three people at a time to hold her for three physical therapy sessions each week. Sarah felt she really knew this bird when the eagle was released back to the wild. Sarah is the Executive Director of the recently-founded Erie Bird Observatory, a conservation and research organization in Erie. 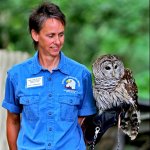 Being raised Native American, I’ve always had had strong respect and appreciation for all wildlife and raptors - particularly the majestic Bald Eagle.  Spending time with my parents as a child watching local Bald Eagles and participating in family hunting and fishing trips further instilled that sense of appreciation and respect.  From my teenage years and even before, my heritage and upbringing cultivated a desire to want to help wildlife and raptors.  When I initially enrolled in one of Tamarack’s Wildlife First Responders Courses, I realized that I had likely found a way right here in my own community to provide some help.  One of my first observations, aside from Tamarack’s mission to rehabilitate wildlife and educate the public was their diverse array of volunteers, staff, and board members – I immediately felt like family.  Initially working as a volunteer with ambassador and patient care, I quickly became one of the center’s lead educators.  I found it rewarding when a student’s eyes would light up when I introduced them to an ambassador during an education program, or watching a raptor take flight into the wild after a successful rehabilitation.  After only a few years as a volunteer and educator, I graciously accepted an invite to sit on the board.   It's been a pleasure meeting and working with volunteers from such diverse backgrounds and cultures as we help raptors and wildlife in need and educate our community on how they can also help. 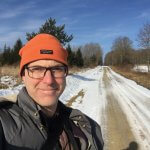 Tomas Nonnenmacher is a professor of economics at Allegheny College. He has always enjoyed listening to and watching birds while on walks in the woods, but became a more serious birder when his wife bought him a guided bird tour as a present. He has birded throughout the United States and beyond, but his favorite bird-related activities involve discovering new birds, birding locations, and bird behavior in Crawford County. 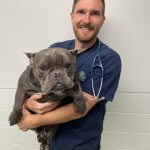 Dr. Donald Consla was born and raised in Meadville, PA. He attended Allegheny College for undergraduate studies and then Western University of Health Sciences for Veterinary school. Currently, Dr. Consla works at Animal Friends as the Lead Veterinarian of Wellness and General Practice. Dr. Consla started his work with TWC during his freshman year of college as a work study and continues as the organization's sponsoring veterinarian. His favorite part of working with TWC is improving our regional environment through the rehabilitation of wildlife patients and education of the public.

Since childhood, Kelsy Astry has been enamored by the majesty and splendor of nature. She spent her youth camping on the banks of French Creek, hiking the woods around her home, and devouring every National Geographic article she could get her hands on. As an adult, those experiences have translated into a deep respect for wildlife and a commitment to organizations such as Tamarack Wildlife Center. Kelsy began volunteer work with TWC in 2018 after she completed a capture and transport training course. It was that experience that solidified Kelsy's commitment to wildlife education and rehabilitation, and the launchpad from which she began her work as a volunteer and eventual board member. Kelsy's educational background includes bachelors of science in psychology and minor in biology from Allegheny College in 2012. Professionally, she works as a senior consultant for a supply chain software company. At home, Kelsy enjoys caring for her three indoor house bunnies, is an avid gardener, a longtime crocheter, and enjoys staying physically active. 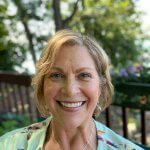 Charlotte gained her appreciation and love of nature and wildlife growing up on her family farm in North East, PA, while exploring the woods around the farm and  family’s camp near the Allegheny National Forest, and countless hours on her grandparent’s beach on Lake Erie. Always a lover of animals, her appreciation of birds came from her mother, who loved to watch the birds and taught her how to use a bird book to identify species.  On a  walk one winter morning in 2013 while visiting family in North East, Charlotte came across  a little screech owl who was nearly frozen.  Charlotte had seen Tamarack on the news and knew to call them for help.  A few years later, Charlotte moved back to North East after a 35 year banking career in the Midwest. She had followed TWC on social media and knew she wanted to get involved.  In 2017, she attended the Wildlife First Responder course and became hooked on Tamarack and its mission.  After several years as a capture and transport volunteer, Charlotte joined the board of directors in 2022.

Donations and memberships are the lifeblood supporting Tamarack's work of healing injured wildlife and returning them to the wild. Tamarack does not receive government funding. The injured, orphaned, and sick wildlife survive because of the generous donations of folks like you. Sharing your time and skills with the center is always welcomed. Become a member of Tamarack, sponsor a wildlife ambassador, or make a memorial contribution. It's your donations that give these animals a second chance.