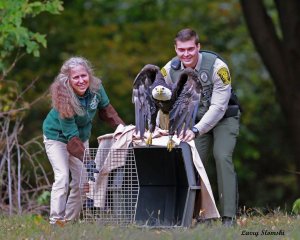 Carol is licensed as a wildlife rehabilitator by the PA Game Commission, Fish and Boat Commission and the US Fish and Wildlife Migratory Bird office. She grew up in Springfield, Ohio where she had an affinity for wildlife and helped injured animals get care from wildlife rehabilitators, a fledgling profession at the time. After graduating from Earlham College, she obtained an MA from Northern Illinois in Outdoor Education and worked in outdoor programming at various environmental education centers, Outward Bound and for ten years at Allegheny College. In 2006 she began working at Tamarack and specializes in the care of raptors. She finds it a privilege to work with the wildlife and volunteers at Tamarack and is inspired daily by all who contribute to make the center possible. Outside of Tamarack, she enjoys time with her family, and being outdoors. 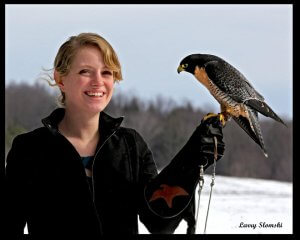 Jess initially became involved with Tamarack in 2012 while she was a student at Allegheny College where she received her bachelor's degree in Environmental Studies and Biology. She then spent several years as a Senior Aviculturist at the National Aviary, where she specialized in working with seabirds, shorebirds, and waterfowl as well as a wide variety of passerines. Jess is especially interested in the promotion of animal welfare, providing high quality husbandry, and inspiring people to connect with their wild neighbors. In her free time, Jess fosters parrots and loves to get outside with her dog. 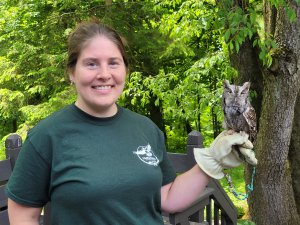 Melissa officially joined the Tamarack staff as Outreach and Education Coordinator in the summer of 2022, but she is no stranger to the organization. After completing a Wildlife First Responders course in 2009 she served as a capture and transport volunteer for 12 years. A nature lover since her childhood, she always knew that she would work in an environmental based field. Melissa holds a BS degree from Allegheny College in Environmental Science and completed a double Masters program at Slippery Rock University receiving an ME in Environmental Education and an MS in Parks and Resource Management. Melissa gained experience in the environmental education field working for the National Park Service, Pennsylvania’s DCNR at Presque Isle State Park, and Asbury Woods in Erie PA. Melissa holds certifications in Interpretation and loves helping to create inspired connections between program audiences and the natural world around them. In her free time, Melissa enjoys reading, running, travelling, and spending time with her husband and rescued pitbull. 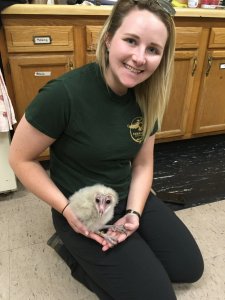 Heather was Tamarack's Wildlife Rehabilitation Manager for several years after working as an Environmental Education Specialist at Bald Eagle State Park with the Department of Conservation and Natural Resources. From an early age, Heather knew she wanted to work with animals, so she participated in youth and teen programs related to conservation biology and animal behavior during her middle and high school years. While in college, she interned at a wildlife rehabilitation center and completed multiple internships in animal husbandry and conservation education at the Pittsburgh Zoo & PPG Aquarium. Heather received her bachelor’s degree in Zoology from Kent State University and then pursued a master’s degree in Environmental Science and Management from Duquesne University. She has moved on to a position with the Pennsylvania Game Commission researching wild turkeys, but continues to be involved and helps to support Tamarack with some wildlife care and administrative roles! 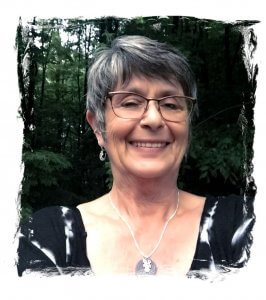 We love our part-time Office Manager Barbara Pagano. Barbara comes to us from an environmental construction company that restores the natural functioning of streams and wetlands; critical habitats to plants and animals including frogs, turtles, waterfowl and songbirds. Barbara attended TWC’s open house in 2018, met our Ambassador birds, witnessed the release of a Red-tailed Hawk and the rest followed naturally. She attended TWC’s Wildlife First Responders course and became a volunteer. Her passion for our mission to rehabilitate and return to the wild was immediately evident. Barbara is no stranger to looking after birds, she has had many adoptees in her care over the past 25 years. In her spare time, she gardens for wildlife, planting natives that provide shelter and food. She also brings to us the experience she has gained from a diverse work background in public relations, marketing, graphic design, and nonprofit office administration. 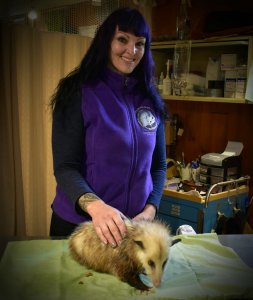 Janelle is licensed as a rehabilitator by the PA Game Commission. Originally from Chicago, she always had a passion for working with mammals. In college, she volunteered at Cosley Zoo and had the opportunity to study a wild wolf pack in Ely, Minnesota. She began volunteering with Tamarack in 2014 and took an immediate interest in working with our only native marsupial, the opossum! She was the primary caregiver for "Prudence", Tamarack's first education ambassador opossum, and now cares for "Hobbles" our current ambassador opossum. She is committed to teaching the public all about opossums and specializes in the rehabilitation of them. She finds them to be absolutely fascinating! Janelle is a professional singer and an artist and likes spending her free time studying, working on her aquariums, hanging out with her cats, dog and quails, and gardening.

A crew of volunteers including onsite assistants, interns, medics, and educators do such things as feed and care for the wildlife, give education programs, and manage the other daily needs of the facility. Also assisting the center's staff are Wildlife Helpline Volunteers. These trained volunteers respond to phone messages left at the center regarding injured wildlife or other questions. Tamarack's hands-on Board of Directors handles behind the scene details such as fundraising, promotion, and finances.

Remember, only a Licensed Wildlife Rehabilitator can care for injured wildlife. Please DO NOT try to treat wildlife yourself. Tamarack's expert team can be reached at: 814-763-2574.