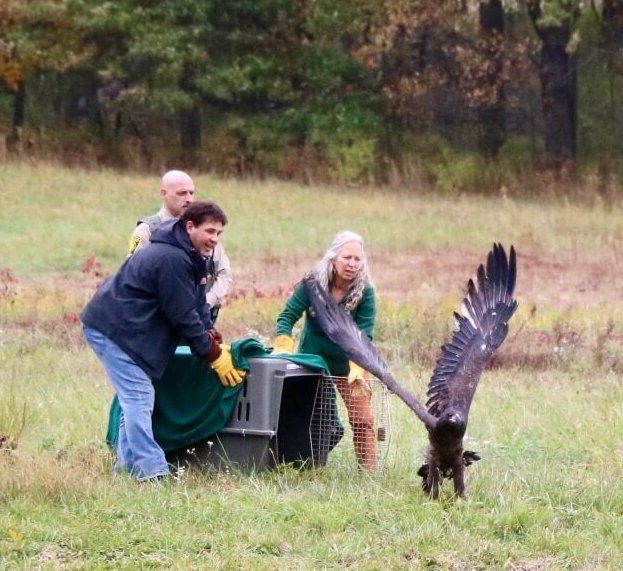 Each patient admitted to Tamarack Wildlife Center leaves an impression on the staff and volunteers, but it’s rare for a patient to capture the attention of thousands of people around the world. A juvenile Bald Eagle, Rosie, was able to do just that. Rosie gained fame as a member of an eagle family nesting along the Monongahela River that was showcased on the popular U. S. Steel Eagle Cam.

Before fledging, Rosie suffered a fall and broke the primary flight feathers on one wing, leaving her unable to get airborne. True to this unique eagle, her rescue story was one for the books. Camera monitors witnessed her fall, and soon after, TWC’s director assessed footage that confirmed she needed help. PGC Warden Schellhammer and U. S. Steel Irvin Works Plant Manager Don German scaled a steep ravine to capture her. Perhaps the most important team member was Rosie’s sibling that remained perched in a tree right above her guiding her rescuers. Without the Eagle Cam and her sibling, Rosie would not have survived.

Rosie was stabilized by colleagues at Humane Animal Rescue of Pittsburgh and then transferred to TWC on July 3rd, due to our specialty in treatment of eagles. During treatment Rosie underwent a process that replaces lost or damaged feathers called “imping.” Donor feathers were carefully implanted into the existing feather shafts on her wing, like a hair extension. This procedure was successful and replaced 12 feathers.

After the procedure, Rosie immediately tested her new feathers with a short flight up to a low perch. After that first taste of flight, Rosie wasted no time challenging herself to fly farther and higher. The next day she was flying to her highest perches.

Rosie soon surpassed all expectations in terms of her flight skills. The ever curious Rosie continued to gain strength and stamina, and she demonstrated excellent aerial maneuverability with 180 degree turns. What’s more impressive is that Rosie perfected these skills without full use of her tail which serves as both a rudder and brakes when birds fly. Rosie had sustained damage to her tail feathers when her wing was damaged, and she could not safely be released until they regrew. Rosie once again rose to the challenge and regrew all but one of her tail feathers sooner than expected.

With Rosie’s quick progress, Carol Holmgren, Executive Director and Lead Wildlife Rehabilitator at TWC, conferred with colleagues at other raptor centers and all agreed that Rosie was ready to go. Rosie was released near Pymatuning on October 20th, in collaboration with Pennsylvania Game Commission. For the big moment, her carrier was opened by Don German of U. S. Steel and Tamarack Wildlife Center’s head rehabilitator and director Carol Holmgren, with PGC Warden Wingenback looking on. Rosie immediately took off for her first flight ever in open skies. She delighted all those present by circling three times overhead before eventually perching in a nearby stand of trees.

Rosie’s rescue, rehabilitation and release was a team effort. We are grateful to all involved, including TWC supporters that allow us to be here for amazing patients like Rosie. Our hearts take flight with her, as she takes to open skies. 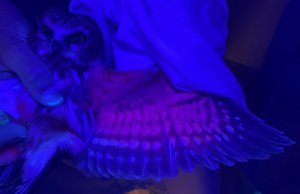 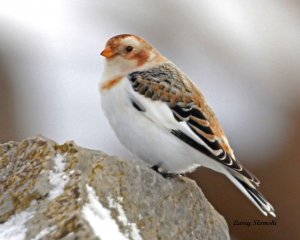