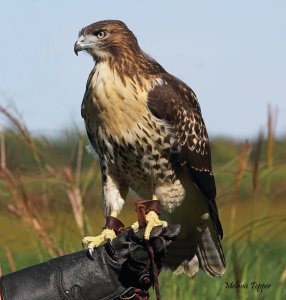 Ruby hatched in the spring of 2019 and suffered an injury shortly after she left the nest, which resulted in the loss of her right eye. While she can no longer hunt well enough to survive on her own, she can still fly and is doing fantastic learning to be an ambassador. When she’s not in training, Ruby enjoys taking baths and interacting with various enrichment items.

Red-tailed Hawks are the largest and most common hawks in Pennsylvania, and they get their name from their red tail feathers once mature. Ruby’s name was suggested by a member of the public because rubies are associated with the power of life, which she will be bringing to our ambassador program, and once she is an adult, she will have a beautiful dark red tail.